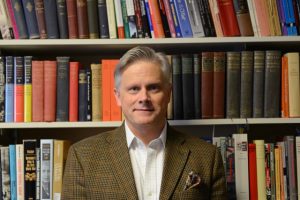 Associate Professor of History Erik Grimmer-Solem investigated the story of a celebrated German General during World War II, uncovering new evidence that he cooperated in committing war crimes and crimes against humanity during the 1941 invasion of the Soviet Union. His research has made national news in Germany, where the government is now responding to revelations about the General’s legacy. More

In a March 7, 2014 report in Pfalz Express, Mayor Marcus Schaile of Germersheim mentioned that news about General Hans von Sponeck’s involvement in war crimes initiated by Prof. Grimmer-Solem’s research took him and the city council by surprise. “For the Federal Armed Forces stationed here in Germersheim but also for the city itself and its citizens it is now necessary to enter into a dialogue quickly about finding a new name for the barracks.”  On February 28th Mayor Schaile informed the city council that a special meeting of the council would be held with the participation of the local Air Force commander. They will then consult with an Armed Forces historian and local citizens to determine the new name of the barracks. “As soon as the new name has been found for the Air Froce barracks a final critical engagement with the history surrounding Hans von Sponeck must begin. After all, a Sponeck monument is in the city park Fronte Lamotte and also a street in our city was named after him. Here, too, the city council and citizens will have to make quick decisions.”