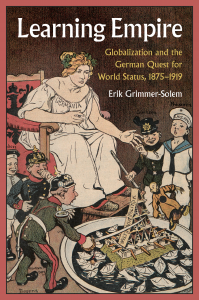 After nearly ten years of research in German, British, and American archives and much writing in the years 2013-17, my second book project has now been completed and is being published as Learning Empire: Globalization and the German Quest for World Status, 1875-1919. (Cambridge: Cambridge University Press, 2019). Learning Empire, seeks to reshape our understanding of Imperial Germany’s history by reconstructing the complex overseas entanglements of Germans in North and South America, Japan, China, Southeast Asia, Russia, and Ottoman Turkey.  By highlighting the impact of the world on German naval and colonial policy, Learning Empire offers a novel reinterpretation of the full arc of Imperial Germany’s history and thus a new perspective on the deeper origins of the First World War that highlights the prominent role of middle class scholars in shaping a German form of “liberal imperialism.” Since the work of the historians Fritz Fischer and Hans-Ulrich Wehler in the 1960s and 70s, and the important critique of the German “Sonderweg” (special path) thesis by David Blackbourn and Geoff Eley in the 1980s, such deeper historical reinterpretations of Germany’s imperial past have only rarely been attempted. Learning Empire makes it possible to view German history between 1875 and 1919 as concurrent with the rise and demise the first era of globalization, linked directly to the profound changes in the global system brought on by the emergence of Germany, the United States and Japan as new world powers. The primary ambition of this project is to bring the world back into German “World Policy,” where it has long been missing due to the dominant historiographical preoccupation with the domestic origins of German imperialism and the still very Eurocentric frame of German history. At the same time, it connects the history of American westward expansion and industrialization and the modernization of Meiji and Taishō-era Japan with Germany in ways that help overturn the exceptionalist master narratives still dominant in these two still very insular historiographies. This changes how we view both the “German question” and the history of the 20th century, and it invites reflection on the problem of disorder and instability accompanying globalization in the current century.

“The history of Imperial Germany is currently being rewritten and Learning Empire is the most sustained and profound intervention yet: a magisterial tour de force that establishes Germany as a global player in the decades before World War I. Meticulously documented and driven by a strong vision, it reinstates the middle classes, and economic specialists in particular, as the driving forces behind Germany’s global quest. Impressive!”

“Erik Grimmer-Solem’s new book is a sustained tour de force of integrated intellectual and political history, whose impact will surely shift our perspectives on the complicated meanings of the ‘German question’ for the transnational instabilities of global politics in the late nineteenth and early twentieth centuries.”