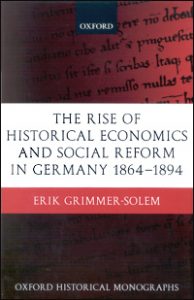 My first book, The Rise of Historical Economics and Social Reform in Germany, 1864-1894 (Oxford University Press, 2003), grew out of a doctoral dissertation that sought to fill in three historiographical gaps: the thought and milieu of the economist and social reformer Gustav Schmoller, the origins of German social reform, and the development of the social sciences in Bismarckian Germany. It was explicitly a work of revision in that it sought to correct a number of persistent misconceptions in the history of economic thought about Schmoller and the so-called “German Historical School.”

Questioning the rubric “German Historical School” associated with Schmoller, the book reveals the European context of his thought and the influence of empiricism, statistics, and advances in the natural sciences in his choice of methods. By exploring the social context in detail, the book demonstrates how the nexus of young scholars around Schmoller fundamentally reshaped German economics into a tool of social reform of direct relevance to the many “social questions” raised by rapid industrialization and urbanization in Germany in the 1860s, changes which culminated in the creation of the Association for Social Policy in 1873. Novel in these reform efforts was the idea that inequality and poverty were ills emerging from the division of labor which society had an obligation to remedy. Consequently, an awareness of the social implications of individual economic action emerged which proved remarkably useful for the development of social policy. While the dissemination of this reform message influenced public opinion and put social reform on the political agenda, the book shows that Schmoller and his colleagues nevertheless remained a beleaguered group subjected to persistent attack from all political directions. The investigation brings the fissures within German liberalism into sharp relief, revealing the persistence of a potent ideal of a classlessness that fundamentally shaped German social policy. More broadly, Schmoller and his colleagues initiated a program of research that proved remarkable fertile for the development not only of German sociology and economics after the 1890s, but the social sciences in Europe, America and Japan in the twentieth century.

Since completing the book, my research and scholarship have moved in three broader directions: (1) German imperialistic politics as this involved economists and other social scientists; (2) the impact of interpretations of German history on Asian historiography, as well as the influence of Germany on Japanese higher education in the Meiji era; and (3) the involvement of the Wehrmacht in war crimes and crimes against humanity during the invasion of the Soviet Union in 1941.

“[A] significant and important achievement, especially when we remember that the Anglo–American cultural and language area has tended to hold a negative image of the Historical School of German political economy. This new publication has permanently corrected this image; to some extent, we can even speak of historical rehabilitation.”–German Historical Institute Bulletin

“[A]nyone interested in the history of economics and social policy will find this volume deserving of attention.”–Modern History

“This is a bracing, judicious and eye-opening volume on the nature and functions of the German Historical School of Economics.”–EH.NET

“Well-organized and clearly written….succeeds in illuminating the wider implications of the historical economists; policies: the ethical foundations of social life, nation-building , civil society, the role of the state, and the integration of all classes into the socioeconomic structure.”–American Historical Review